Back in the early seventies this bank was known as FNCB, First National City Bank. It was admired, envied and used as a role model for aggressive (commercial) banking. It’s CEO for almost twenty years, Walter Wriston was considered the eminence grise of banking. Once , with a group of about eight people, I had the pleasure of having lunch with him. He was definitely made from the old patrician, aristocratic benign despot mould. Then there was Sandy Weil who believed in one-stop-shopping and built a not so cohesive empire accordingly. Jim Reed was another one, perhaps best known for his remark that you got to keep dancing as long as the music goes. Rubin was right up there as well and together with Greenspan was instrumental in making all this possible by getting rid of Glass-Steagall by repealing it in ‘99.

In short this bank, once the biggest  in the US, was always in the limelight. It also managed to trace out a spectacular Elliott Wave pattern, that of an A-B-C. The time between the top and the second top is about six years, about the same time as this market has spent doing the same thing. In fact in Canada it was precisely six years to the day! The B-wave in this case lasted about four years and had the same “feel” to it as the markets have had over the past few years. Under the circumstances it is difficult to stay focused unless you have a good look at the C-wave. Typically it is about 1.618 times the size of the A wave.This may be exactly what the markets have in store for us soon! 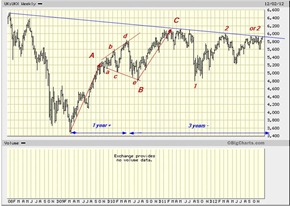 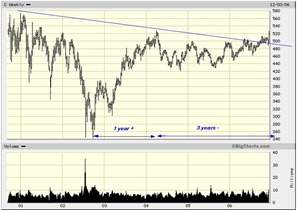 On the left we have the FTSE, London for the past 5 years. On the right the same idea with Citi Group. Very roughly one can divide the time frame in both these charts in two segments. Granted that I have chosen rather arbitrary points, I still hope that the general idea will come across. The first segment is the rebound immediately after the steep drop preceding it. In both cases the lion’s share of the rebound is accomplished in a little over a year. Then there is the second segment during which the index/stock essentially do not move all that much. So far this segment has lasted just shy of 3 years. It can be very painful if you are expecting a move of some substance and it simple does not happen. Be patient, it will but only after you have almost given up.

We do not know what will happen to the FTSE, but we do know precisely what happened to Citi Group. Here they are again in a larger time-frame; 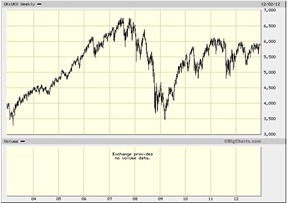 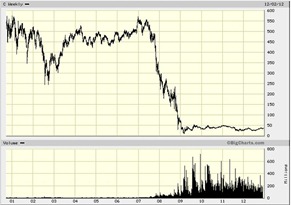 Who knows if there is any predictive value in this analysis. Time will tell.

Citigroup is going up nicely. Updating the chart it could go ( relatively ) much higher. 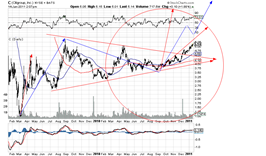 It was first recommended at $3.95 or so on the “too big to fail” approach without much regard to the EW structure. Applying that approach now, we must confess not being entirely sure if the drop from $60 or so to ground level  was a C wave  (that is part of a correction that had started some ten years earlier, see previous blog for chart), or a first wave done (which would beg the question, how much lower can you really go from ground level? ) Nor is it clear from the short term chart whether or not the upwards move over the past 2 years or so , is itself a correction(a-b-c) or a real new beginning. Fortunately, for the time being at least, it does not matter! The stock should trade back to the 4th wave of previous degree at about $8, and at one higher degree at $22 or so. So if you feel lucky let your 30% profit , so far, run. However do keep a running stop! Going through $5 allows more buyers to enter the market , so perhaps that will help. 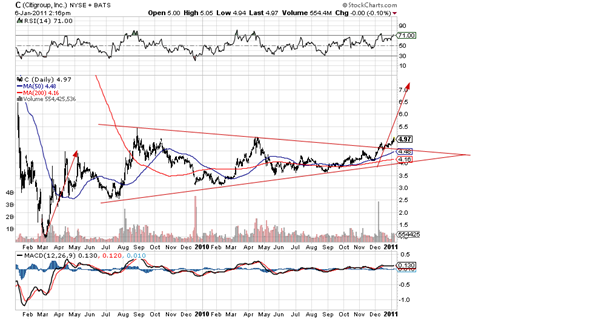 The one at the top is from June last year, looks like it did the “or B” longer version of the triangle. Anyway from $3,95 we are up about 25%. Relatively speaking this one can go a lot further.