Another look at the banks can be informative. First I have made it rather well known that I was VERY bearish on the banks, way too early perhaps as I have held this view for at least 3 years now, if not longer. Here is why; 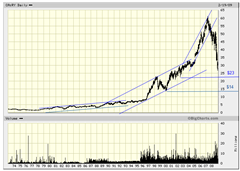 First of all the stock is up in (arguable) 5-waves, increasing the tangent with each new leg up suggesting a bubble of sorts  that would require a large correction any time. Normally to the 4th wave of previous degree that could be at $23 to $14. This move, as with all the banks does not correlate to the growth in population or any other metric that would justify it. Also it far exceeds all the â€œotherâ€ stocks as shown in the lower chart overlaying the TSX, which itself did pretty well but was outperformed by about 1500% from the base in â€˜74.

Looking at BMO things are a little clearer as the position of the 4th wave is less ambiguous.