When gold reaches about $1000 for the second time in a couple of years it is hard not to take notice, all the more so as this area for investing is so confusing and full of mythology. There are the died in the wool gold bugs that see the world coming to an end and somehow the gold will comfort them. At the other end of the spectrum are those that see little more than an industrial commodity. Indeed it is impressive to see how at least silver, ever since the demise of Eastman Kodak and the traditional photo, has not even been able to regain  half of the value  it had when the Hunt bros. tried to corner the market, about $55. The truth is likely somewhere in the middle. Believing in the guideline that things alternate, my guess is that this time deflation will more likely be the problem so I am not (yet) inclined to believe that gold is going to $2000 and higher (where , by the way, it should already be given what is happening lately) Here is what we do know. 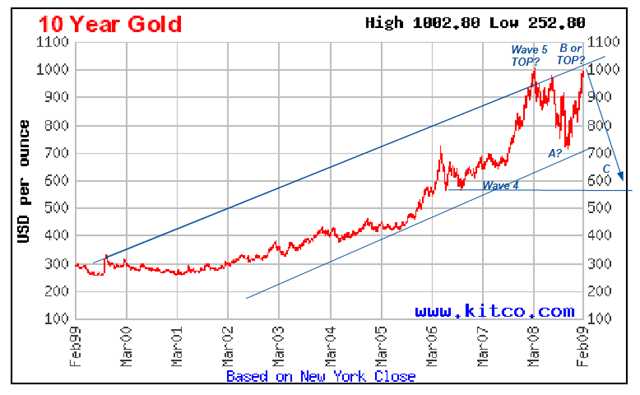 Gold clearly double topped or should proceed onwards and upwards immediately. It never corrected to the level that it â€œshouldâ€ have at about $580 which begs the question will it. Looking at gold stocks the XAU is probable the best  to go by. 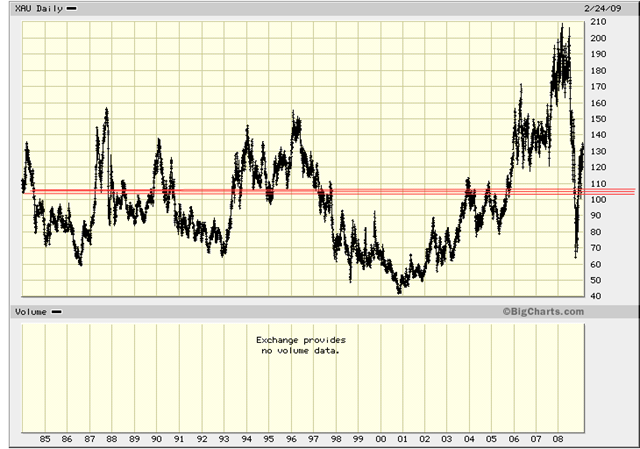 Notice that while the metal went up 5-fold, the 13 stocks in the XAU have barely moved from the arbitrary red line I put in the chart as an average for the past 20+ years. Given the non-correlation why would you own stock?

Concerning the stuff itself, the US government in the early 1900s confiscated all gold in the country at about $24 /ounce and then revaluated it to $35 while  prohibiting ownership and commerce in the metal. Not a great prospect either.