In the good old days it was M1, which would be announced on Thursdays  at about 2 pm , that captured the imagination of all market participants. That became M3 because it was supposed to be more accurate or meaningful. Then Doctor Doom from Solomon Bros, or was it Goldman?,who was regarded as the guru du jour by everyone. People would fill up the Westin hotel lobby just to listen to his voice. Then we had capacity utilization combined with a fellow by the name of Lacy Hunt. When that stopped working we moved on to the CRB index. That too has been displaced by supposedly better indexes such as the Jim Rogers and or AIG index. Something about the CRB not containing rice despite the rather obvious fact that half the world population depends on it.  Anyhow, here is the CRB. 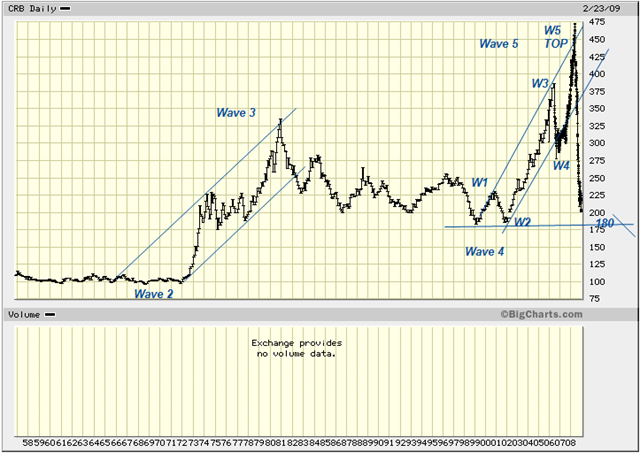 I am not sure what the relative weights are of oil, pork-bellies, coffee and or soybeans but superficially we have the answer to the question when commodity stocks are going to stop falling (maybe), and that is when the CRB hits 180. Except if we start getting real deflation!