By chance I tripped over this chart. It has a very well defined pattern. 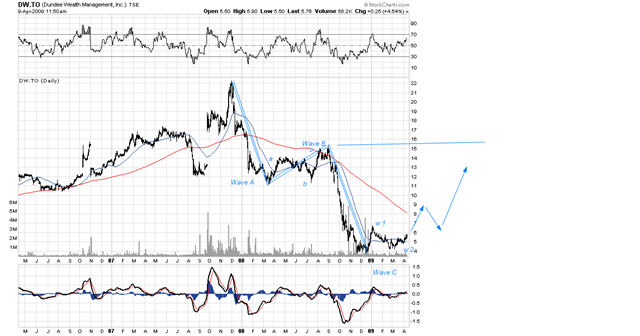 First and foremost, when you go from $22 to $4, or down give or take 82%, all this stuff about the great depression and stocks dropping 90+% becomes pretty meaningless as for all intents and purposes you are already there (assuming, of course that the company is viable). Secondly this pattern is quite common and very reliable, essentially it is an A-B-C with the C=A as vectors (the B itself is either an a-b-c or a triangle) Recent examples would be Ivanhoe and Reitmans; a better example that already has done its thing is CI (US) Cigna. 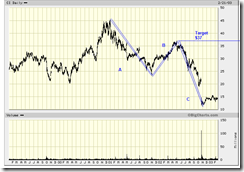 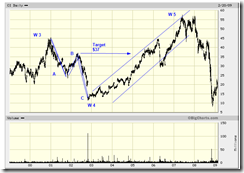 As this occurred a while in the past the top chart is from the past and the bottom one shows what can happen. The low was in 2003 or thereabouts and it went straight to the moon and back again. I do not anticipate anything so robust but on average the stock should return to the top of the B wave, say $15 and should do so in about the same time as it took to go down, about a year, or half of that. Given where it is a good trade would be to $9 where you earn 50%

As always click on the chart to enlarge, you can then even move them around to get two side by side.