Cameco is the largest uranium miner in the world. It is a little water logged but that problem will pass. For the moment nuclear energy is the only big scale realistic solution for the energy problems of the world so demand for its product presumable will continue and expand.  The chart supports that (long-term view). Here it is in the big picture. 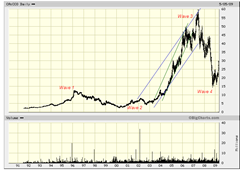 At first blush this is a initial first wave followed by many years of downward movement in wave 2, perhaps while the Russians were decommissioning there submarines and other rusting toys, followed by a third wave up. I assume it is all a third wave simple because the structure suggests it and there are a distinct 9 segments (5+4). That is followed by (perhaps incomplete) wave 4, which so far is a very clear a-b-c, where c is more or less equal to a. In this count wave 4 cannot overlap wave 2 and indeed it does not, 12/13 for wave 2 and 15 for wave 4. The risk in buying CCO was therefore very low at $15. Here is more detail. 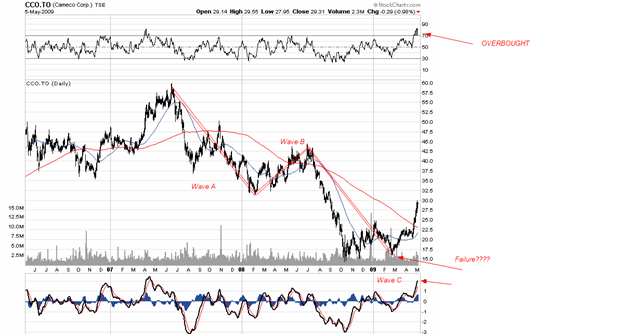 Notice that wave C is more or less equal to A. The exact termination point could be argued but either way this has the potential to go at least to $45 or even new highs  OVER TIME. At this very moment it appears a little overbought given the RSI and MACD but give it a week or so it still looks like we are in a small 3d wave up, so despite ,perhaps ,a few dollars pull â€“back I suspect we go on for a little while yet. The real critical point is around $31+, if it can breach that (overlap) the world opens up for higher prices. Depending where one owns this, it may, in a zero cost environment, be sensible to sell here and buy again at $32 (something I have great difficulty actually doing).

Long term, as in this count waves 2 and 4 do not alternate, thought should be given to this wave 4 becoming a multi-year triangle. We are in that scenario in wave b of an a-b-c-d-e sequence. This b should get to about $50.  DML is an alternative at a lower cost but not as robust.

UUU, click to enlarge, suggests that there is still some room ahead immediately, also lower that $1 is about as bad as it can get coming from $18. There are probable others in this space.