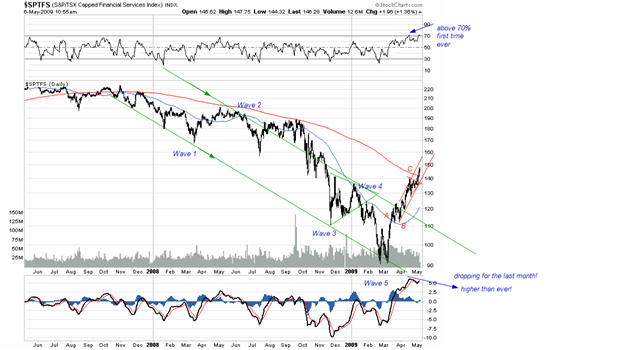 To avoid the idiosyncracies of individual stocks and the skewing effect of high-cap. weighting lets look at the S&P TSX capped financial sub index. As shown earlier we approached the financials as grossly overvalued (in the US they accounted for 70% of earnings,  both in Can. and the US their weight in the respected indexes had grown from 10 to 30% etc. etc. ). In Canada perhaps because of the home-bias, the lack of choices and the oligopolistic nature of the business and, lets not forget, the almost incessant lobbying against foreigners. So at 220 where would one expect this to go? Answer, Gartmansâ€™ box, even the lower end of it, a Fibonacci  50 to61.8%. On 220 that gets you to 110 to 84 ( in reality the base should be taken out so these ratios apply only to the last gain) The actual low occurred at about 90 at which time an analyst at a large Canadian  investment firm  suggested these banks should cut their dividends ( a very popular idea if ever there was one), in order to solidify their , presumable , fragile capital positions. Once the low is recognized where would one expect this to go. Same simple formula,  about 50 to 61% back up , which on 130 is anywhere between 65-79 or 155 to 169. (Remember this is all consistent , even with a rabid bear market!) So here we are near 150. It took 16 months to go down an 2 to go back up. Now the same investment â€“dealer, the same analyst is getting excited about bank stocks. Just in case  this leaves you wondering, there is the added caveat that â€œthis (opinion) is not reflective for bank earnings near termâ€. Got it? In the mean time the RSI is above 70% which has not occurred for years, the MACD similarly is at previously uncharted levels and going down now for several weeks.