Lets have another look at Ford, just to make sure we got it right. Here is BigChart for the last few years. 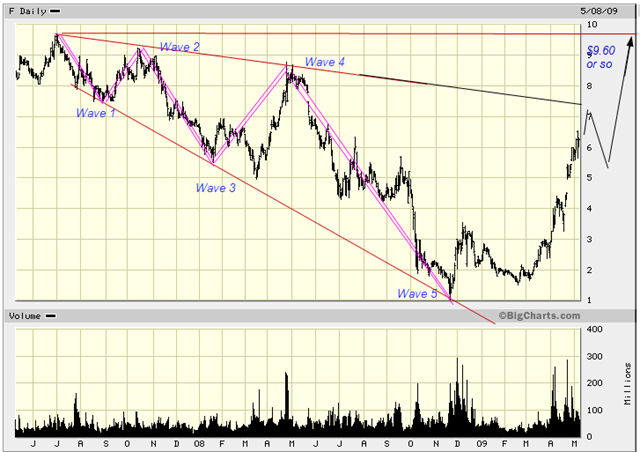 This particular pattern is a â€œdiagonalâ€in EW terminology; in plain English it is an expanding wedge. It occurs always in a 5th wave position (or C in a correction). What it tells you is that things have gone too far and too fast and hence one should expect a violent (relatively speaking) reversal, invariable back to where the pattern started or further. All legs within the pattern must be 3â€™s (sometimes hard to tell as there are irregular corrections which make things look as if they are 5â€™s) Below is the â€œmodelâ€once again. 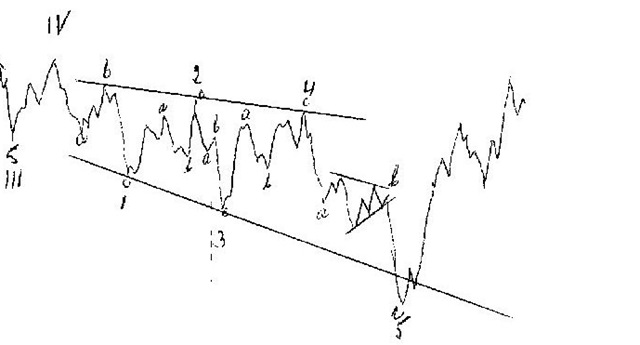 Notice that all the waves are pretty well identical except for wave 4 which is irregular in Fordâ€™s case and not in the model. Otherwise everything is as it should be. This would allow a rise to about $7 before a serious pull-back should occur, but that is fiddling in the margin. Keep your eye firmly on $9.60+ as a minimum.

One other thing that supports Ford this time is the â€œguideline of alternationâ€, it is not a must but more often than not things reverse themselves the second time around. During the 1930 Ford lost money and GM and Chrysler did not. Ford dropped from #1 to #3 , GM and Chrysler went to #1 and #2 positions respectively. Ford was pedantic and clung to outdated ways of doing business, a description that now better fits GM. By the way, from 1929 to 1932 vehicle production in North America dropped from 5.4 mln. to 1.4 mln., down by about 75% This time around the numbers are 16 mln. to 10 mln. give or take, which is slightly more than 30%. So Ford may not be a hold forever, on the other hand, it could go to about $15 just to retrace the entire 5th wave down, also very common.