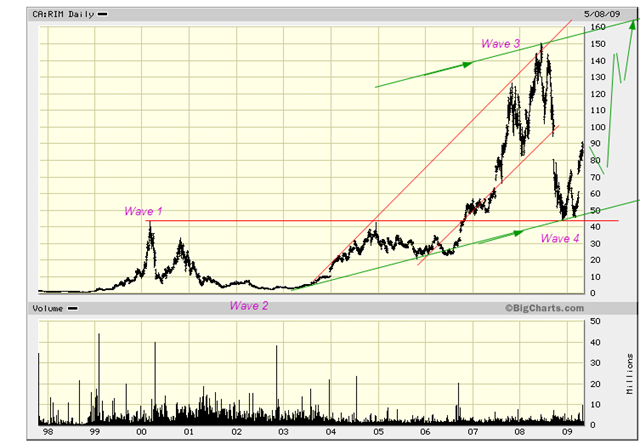 Under this count all of the action fromâ€™03 to â€˜08 was wave 3 (notice that it stayed above wave 1). Ergo it is possible that we still need a fifth to say $160 to finish the whole cycle. This is at least plausible as RIM was a late comer to the tech party anyway. Now in more detail;

The red depicts the BAD scenario, the green the GOOD scenario. When will we know? One thing would be if we closed the second gap and reattached the island to the mainland, BAD. Alternatively we could close the first gap , GOOD. Keeping an eye on it, but must confess this is a stock I do not understand all too well. The problem in a nutshell is that we have 2 lows, making it unclear if the move down was an a-b-c or a 5-wave structure, time will tell. Fundamentally I can easily envisage either outcome, particularly once you start throwing money at sport clubs.