Just to explain where we might be. The assumption is that we are in some sort of super-cycle degree move. It is possible that this is actually not the case in which case an argument could be made that the A-B-C is done. Notice that B went slightly above and below A in this 9 year pattern and that may just be all there is to it. The DAX has not even gone low enough. Maybe but there are some pretty strong arguments against this view. C is often MUCH larger than A. Also other exchanges do not rhyme with this. Therefore the assumption is that wave C has only completed wave 1 of C as shown, allowing for a big drop to come. 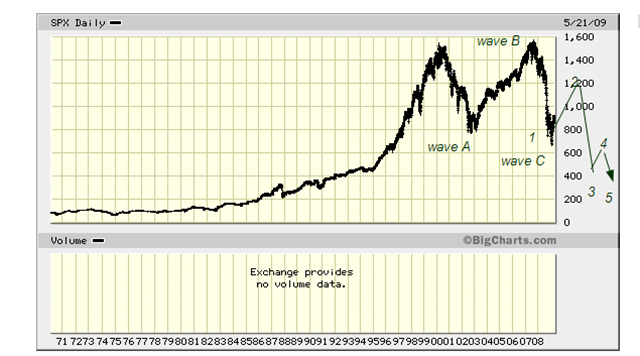 This rhymes with the TSE. 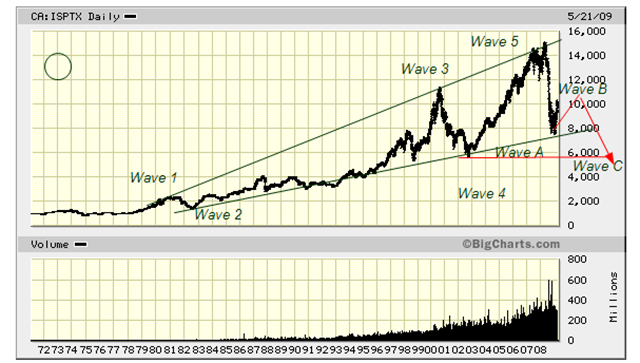 Note that this index, like the NYSE and the Dax and many others has NOT EVEN made it to the 4-wave of previous degree. Now there is nothing to say that it must do that but in al probability if it has not yet it will. So about 6000 or lower is still very realistic even though this could have been an A-B-C where the A and B are very small and the C the %-wave down that we have witnessed. It did go down about 50% and it does contain oil etc. to make it a little different.

A third and last possibility is that we are making a very big triangle. It would have to be irregular as 5-waves do not fit in a triangle. Unfortunately nothing is certain, however considering that this is a 300 year degree correction a return to the 26 year 1000 top on the DOW would be perfectly normal!