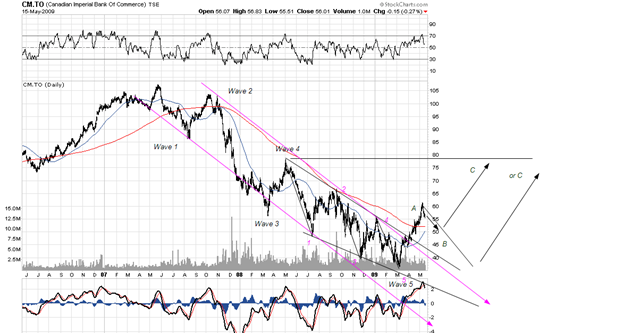 The Commerce Bank CIBC has a nice chart that provides a good insight into what may happen in the Canadian market. The drop from 105 to 35 would certainly qualify as a â€œbear marketâ€ by anyoneâ€™s standards, moreover it is pretty well what one would have initially expected given that the â€œboxâ€ of 50 to 62 % down has a lower boundary of about $40 (which under one count might actually be the â€œorthodoxâ€ low , as opposed to the actual low at about $35). It has a nice 5-wave down structure, no overlap and perhaps a 5th wave that is a wedge or diagonal clearly defining the imminent end to the move. Waves 5 and 3 are about the same size but 3 is definitely not the shortest!

There is one little problem, 5-waves never stand alone, meaning they either attach to an A-B- preceding it (not the case here , presumable , given the 40 or so dollar difference in the value of the preceding  tops), or there is at least ANOTHER 5-wave move following, albeit after a reasonable intermission. The down-trend prevailed for about 17 months, very roughly, so a reasonable intermission could consume the better part of 6 to 10 months. Under one count 6 months have already gone by, under another only 2; either way another 3/6 months of corrective action is not an unreasonable expectation. All this suggests that we may be in a B wave of a larger corrective structure, the point to buy again is at about a 50% retracement or roughly $50 (even a new low at , or marginally beyond the old one is possible but in our present bullish environment not all that likely!The B-wave can develop as a triangle, usually for the simple purpose of consuming more time

As to how high the correction could ultimately go?; if the wedge is indeed a wedge $78 ( alternatively, if the wedge is smaller, $67) is your target; if the $40 is the orthodox low  $40 + 61.8x (105-40)= $80 would be the upper boundary of the new â€œboxâ€. Wave 4 of previous degree, a common retracement level is also at $78. Time wise it could be done by Sept. give or take a month. Interestingly the Royal does NOT have this potential, its best level would be around $51/52 so this opens the opportunity to put on the long CM/short RY trade again, for a potential gain of about $15 or so, nothing to sneeze at.

Once all is said and done the end of the bear market would be when this B wave is complete and followed by a C to make the whole experience an A-B-C. Suppose, for the sake of argument, that wave C has the same percentage drop as wave A, that is about 62%, and also suppose we do go to the cluster at about $78 in B, than ultimately we would end at about $29. This compares to the low in â€˜98 of $24  which low might be considered a 4th wave of previous degree in this larger context and a common retracement target. Notice that this outlook does not rhyme with the TSE overall, but the the banks as a group never did.