E-Wave is all about probabilities. Anyone can count to 3 or 5 so that part is not that difficult were it not that the market always throws in the proverbial monkey wrench. The DAX and the S&P both had near perfect double tops but the NYSE (NYA) and the TSE went way beyond the 2000 highs. The TSE proper has a triple top before it starts to drop and then has a double  bottom (Dec. and March) so it is difficult to , with any degree of certainty, establish where things begin, end and what the intervening pattern is. All one can do is look at what the alternatives are and where the greatest common denominator is found. In other words, try to find the highest probability. Here is the chart again. 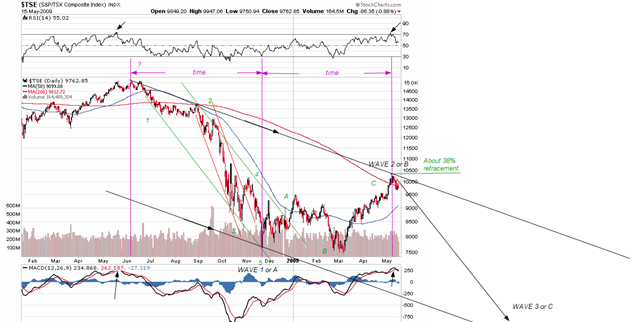 This is a rather bearish outlook and one would hope it is wrong. Still it has the highest probability. The pattern is fairly clearly one of 5-waves down (which never stands alone!) so there should be more to come. Time wise , depending where you start, the time spent going down is essentially equal to the time of the retracement (markets love symmetry). The initial 6 month drop took the index down by roughly 50% (but not to the 2003 lows!). The retracement, which certainly could go higher to 50/61% , or even higher, has so far done about 38% in 6 months, most or all of that in the past 9 weeks. In doing so the market traded above its 200-day moving average and pretty well exactly into the high point of wave 4 (a very common retracement level). Also the RSI was above 70 about equal to the high in June and the same goes for the MACD ( I look at these only to support an EW view). In the mean time stocks like RY went from 62 to just under 26 (50%) and back up to 46 (78%) exactly at times that that bankâ€™s own analysts were either bearish or bullish precisely at the wrong time. The insurers like MFC and SLF have more than doubled from there respective lows and are dropping.

There could always be more bullish scenarios to explain what is going on, but for the moment none stand out as probable. To the 473 viewers last month, thank you for watching. I can be reached at hamilton.jansen@cibc.ca . My phone is not working yet but 905 762 2426 will get you through. This is at CIBC Wood Gundy, in Thornhill. Look forward to hearing from you all.