Most of my life was spent consulting on or trading in FX, literally billions of dollars worth. Since arriving in Canada some 32 years ago most of this related to the Canadian dollar. Furthermore, being familiar with EW and Fibonacci series, Oct of 2002 was a great month for me as I could unequivocally pronounce the imminent rise of the Canadian $ at a presentation we were doing at the Nat. Club. To make things even better the chief economist of one of our most highly regarded investment firms voiced as her opinion that the C$ would drop at least to 50 cents. Here is the chart:

The rates on the right hand are from the Bank of Canada statitics (both pictures can be enlarged).

Notice that the low was at 0.619, very very close to the usual 61.8 ratio. Notice also that the move from 104 to 62 occurs in two legs, drawn as parallel legs in green and almost precisely pinpointing the low point (high on the chart). So what now? 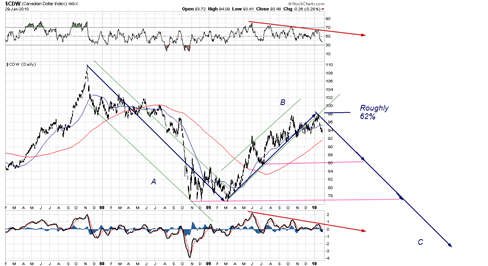 This chart is quoted in the opposite way from the one above, just to confuse a little. For the moment one has to conclude that the Canadian dollar is NOT on its way to parity plus as the general consensus seems to indicate. Back to 80cents is almost a given, back to 77  cents or further entirely possible! Think what that means for gold, materials etc.etc.