The AEX is a reasonable proxy for most other exchanges. The CAC, the S&P, the FTSE, the STOX 50 or 100, Nasdaq and at least another half dozen exchanges that I am aware of. The ONLY clear outlier is the DAX; do not know why. All patterns are a first wave down followed by a wave 2 retracing a good portion of the first wave. (In the DAX essentially 100%) After that another wave down that is probable a first 5-wave down of the next wave 3. This promises a lot of downside to come. Because the DAX is the only aberration and all others point in this direction, I would favor that interpretation as the correct one.

Schematically wave 3 (of C ) should look something like this. 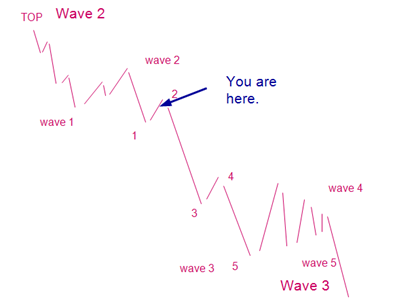 Not shown are wave 1 and waves 4 and 5. At this point this is just a best guess EW scenario, time will tell if it occurs. In the mean time more and more evidence is surfacing that would indicate that it is at least possible.