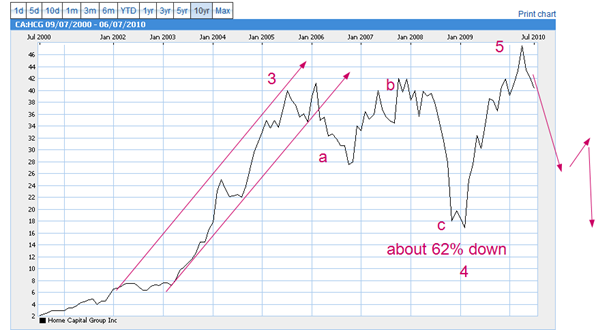 The above long term chart is of Home Capital Group, a company that came into existence sometime in the mid eighties. The company has grown in leaps and bounds and presently has a balance sheet just shy of $8bln or so. Its goal in life is not to compete with the big boys but to wait for the crumbs to fall of the table. By being innovative and actually making credit assessments they have thrived  and have done so in harmony with the big banks ( who themselves were not allowed to do mortgages until the end of the eighties) The big Canadian banks, in contrast to HCG, prefer not to make a serious credit assessment, preferring to throw their immense weight around and asking for, and getting, a lien on your first born, the right of offset wherever that may be available and a variety of other securities. Oddly enough, when you do go a little “sub prime” so to speak, you can actually end up with a better security by way of the , required, backing of the CMHC (Can. Mort. and Housing Corp. ala Fannie and Freddie) Interestingly HCG is the only (publicly traded financial institution) that I can think of that actually made new highs by a fairly substantial margin; a feat not even the cream of the crop, the Royal was able to do.

Looking at the chart through a EW pair of glasses I tentatively conclude that the most recent high was the end of a 5th wave and not a B wave as in most other stocks. If so a fairly large drop is in store for the company, which , by the way, is not a reflection of their management but simple because that is the way it is given the macro-economic forces bearing down on mortgages.

This brings me to the point I would like to make. We all know that the Maestro could not see a bubble if his life depended on it. I was therefore pleasantly surprised to see that Businessweek (now Bloomberg Businessweek) was able to suggest that we actually might have a bubble in the Vancouver area. I travelled there in 1986 and noticed that there were some nice properties on the island that could be had for $250.000 or so. Now a shack will put you down a million+. The article explains that the most favored instrument is a letter of assignment sold by developers. Something like an unregulated futures market and all of this in Canada! Perhaps things are a tad overdone and things will get a little more difficult, HCG certainly suggest that this may indeed be the case!