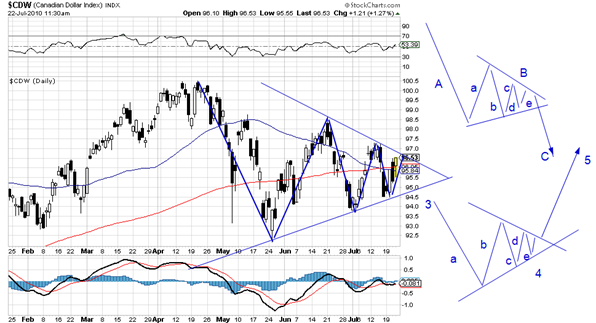 Triangles only occur in two different positions, either a B-wave in an A-B-C correction (the top one), or in a 4th wave position, i.e. one leg (thrust) below and upcoming top (of sorts). We also know that the distance travelled is often equal to the size of the mouth of the triangle, about 8 cents in the top (bearish) case and 11/12 cents in the bottom (bullish) one. In the top bearish scenario 97 is about as  far as e can go which suggests a target of 89. In the bullish bottom case e may have ended at 94 implying a possible target around 106. Of course these targets can be exceeded on either side. Furthermore we know that as often as not the targets are reached at around the apex of the triangle, say early September! Within the triangle every leg must be a 3-wave affaire, this is the case at least for the first 3 legs, thereafter it gets too small to tell. Also there should be an a-b-c-d-e sequence within the triangle, however in certain extreme cases the whole thing extends to an a-b-c-d-e-f-g .

Looking at the bigger picture , I suspect that the move will be down but it is just a very educated guess. Perhaps a break of either 97 or 94 would reveal the next big move. Also , once the move has taken place by reaching either 89 or 106, the whole process should reverse with a very high degree of probability, so waiting for that may be a better trade.

By the way, this may not be a triangle at all!