To elaborate (or add to the confusion) on the earlier S&P analysis here are both the DAX and the FTSE. Generally the FTSE , being English , correlates best with North American markets. 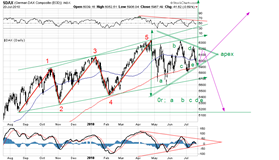 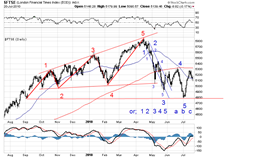 Both market have the same pattern as the SPX  leading into this latest down trend (an expanding wedge). Thereafter the similarities stop. The FTSE does precisely what it should do, which is retrace the entire territory of the wedge, pretty well precisely (the only one to do so). The DAX, on the other hand, does nothing of the sort, in fact after the flash crash it manages to double top (the tops in April and June are for all intents and purposes at the same level). The FTSE probable corresponds best with the red count on the S&P. If so both the FTSE and the DAX should have a big move soon. The DAX which is most confusing is about to complete a triangulation that has been going on for either 2 or 4 months depending how the triangle is drawn. If it is in fact a triangle it normally goes UP in a thrust, if it is not – that is if the triangle is in fact a series of 1-2s of different degrees (3 of them) it should go DOWN hard to at least reach the base of the wedge. All told , looking at all three, down is more probable!

You can click on the charts to enlarge and move them around. I have add the SPX chart below for completeness.