A month ago I suggested that the Euro would turn at around 116 or so, this on the simple basis of symmetry in the down legs. It actually had hit the low at around 118 a couple of days earlier. Here is the chart again; 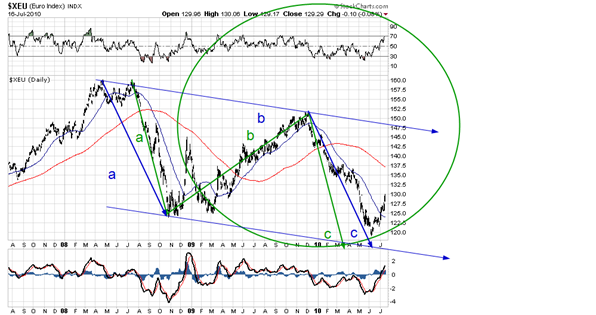 The symmetry, using vectors, is best found using the green lines, any point on the circle representing the vector of the first green line a. which is why we did not quite reach 116. Anyway, here we are at 130 – up a cool 10% – for a currency that was supposed to be wiped off the face of the earth. The next stopping point is around 136 where there was a congestion area and where the 50 day moving average resides.

Interestingly there is a way of double checking this thesis; as it happens the Bovespa , the main index in Brazil , is (at least for the past few years) almost perfectly inversely correlated with the Euro/ US$ exchange rate. So if the US$ goes up the BVSP should go down. Here it is; 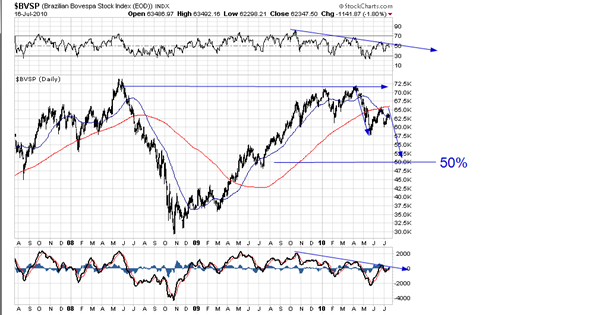 Clearly the Bovespa attempted a double top but failed marginally. From there it has broken down quite sharply and is consolidating. My best guess is that we need AT LEAST one other leg down as a best case scenario (as drawn in blue). Should that happen the outlook for the Euro strengthening to at least 136 makes a lot of sense.

A drop in the Dow Jones would further strengthen this outlook ( these charts are not on the same scale!

Here is the best count I could come up with at this time. Similar counts can be made using the FTSE, S&P, CAC and a whole host of other indexes (except the DAX!) As a minimum a second down-leg should occur soon ( even if this count is not correct as most alternatives are equally bearish). The Canadian dollar (against the US$), is, by the way triangulating implying that a fairly substantial and fast move could occur straight ahead. Given the BRIC/commodities/ exchange rate interdependencies, my guess would be down. Remember that all though we do not speak Portuguese here our dollar is now a commodity dollar and behaves much like the currencies of the BRIC.