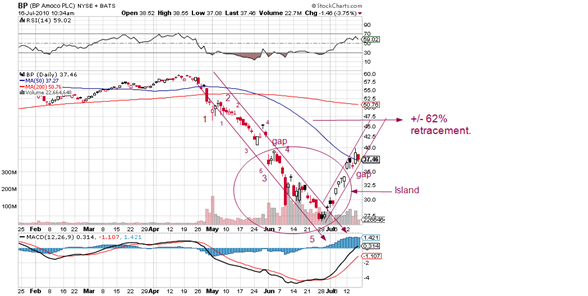 Ultimately BP could go to the $60 level being the top in an A-B-C multiyear correction. We will see but if this does happen it will not be in the next few weeks or months. So what is the shorter term target? Too many things are going right at this time. Exxon  takeover, Arab capital injection, blame spreading,and dozens of other considerations that mean very little. So why not depend on the chart?  $47 is about 62% retracement of the C leg. It also corresponds with wave 4 of 3, a common event. An island of sorts has been left behind by the two gaps on the way down and up, I do not expect the stock to enter this area again, so a drop below $34 is now unlikely. So far the rise from the lows has occurred in a very narrow channel suggesting that it is one single wave! Corrections are invariable a-b-c structures, so if this was a correction which I very much doubt, the stock would first go down only to rise again later. If it is a new bull market, which I prefer to think it is, the first leg up should be 5 waves which probable means that we have one more to go which could easily add another $6/7 to get us to $47 in the first round. There the stock should be sold ( and perhaps bought back  $10 lower).