Previously I thought this one would not go beyond $66, it did so I was wrong but fortunately without too much damage. Here is another try.

On the left is the long term chart and on the right the short term one. Looking at the big picture one cannot help but wonder why people try to invent dynamite or other elusive substances when pork + potato  + heat = riches ; all this while fighting rampant obesity. The stock behaved very much like everything else from 2000 to 2003, losing give or take 80% of its value. From the $10 level in 2003 it quickly regains its composure and actually starts displaying  some very idiosyncratic behavior, rising much further that the market in general. Perhaps this is the difference between a 5th and a B-wave. It becomes a 7 bagger in as many years! Granted one never knows for certain but this is quite a performance and suggests that sticking to the “buy low , sell high” adage points to a short SOMEWHERE around these levels.

Looking at the more detailed chart, it is pretty clear that there was a triangle or, at least, a consolidation period of slightly more than a year starting at the end of 2008. Various interpretations are possible (shown in purple and green) but the common theme is that this is a “thrust” or 5th (and last) wave up. Both the  larger and smaller triangle measure about $20 ($45 to $65) and consequently could lead to a top at about $72.50 ($52.50 + $20). Judging from the two apexes, the peak should already have been reached , or , this should happen in the next few months. The (green) upper trend line suggests a top not much higher than $74 at best. I have some issues with the count, preferring the purple one, but both the RSI and MACD are NOT confirming the new highs, lending credence to the bearish outlook. Use options if a straight short is not practical.

Tim Hortens (THI) may or may not be a reasonable comparison. Note that it has not even managed to double top. See below; 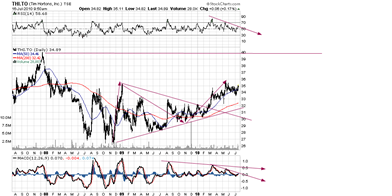 SBUX, Starbucks, warmly recommended near its lows and sold much too early) is another warning sign. It has retraced 62% of the drop from $40 to $7 and that may very well be it. It makes you wonder if there was ever a recession if people continue to pay $4 for a cup of coffee. Here is that chart;