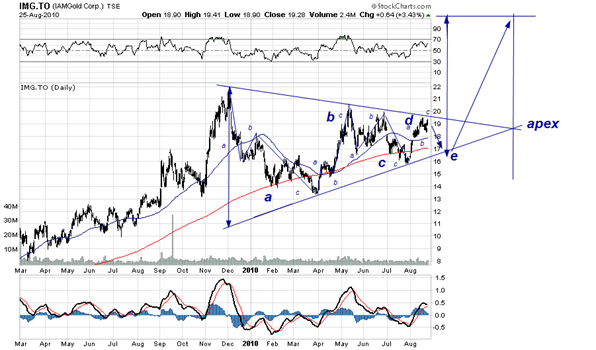 The requirements for a triangle are relatively simple: it should have the a-b-c-d-e (f-g-h) structure, usually each alternate leg is about 61% of either the preceding leg or the one before, wave c is usually the most complex and e can break the trend line but may not trade below the low point of c (however, if it does it may simple mean that the triangle is much bigger than initially thought.  Also, even if it is not a triangle, it still is a consolidation pattern with, potentially, more bullish implications as the triangle is invariable an end-game whereas all other patterns can go on a lot further. In fact , the triangle here is the least bullish compared to ,say, a count that views wave b as 1 up, wave c as 2 down and d again as 1 up. This could take the stock much higher than assuming the triangle. See below; 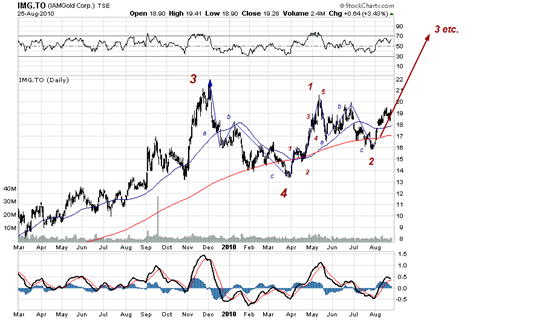 Assuming there IS a triangle, it could still have a larger wave c to become more complex. This would happen if what is shown as e were to travel to $15 or even a little lower. That would not negate the triangle and, in fact , ABX has one that seems to go on forever. The requirement that all legs within the triangle are a-b-c’s seems to be met but for waves b and d it is certainly less obvious that for a and c. So perhaps we are already impulsively on the way up but starting with very small steps like in the chart below.

Then again , if we do have a triangle this may be what is going on; 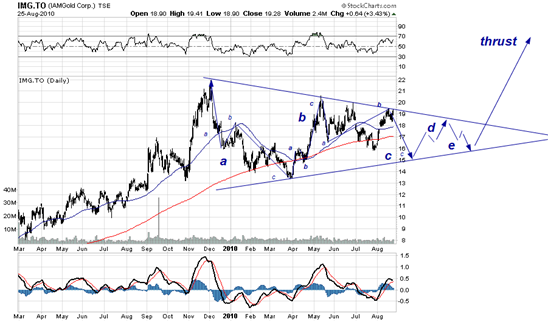 What argues  against this longer triangle is that it does not seem to be in synch with the rest of the market. The best and most “balanced” approach may be to wait for the stock to go through $20 which would suggest the 1-2, 1-2 scenario is operative. There is NO clear bearish possibility right now, given that all down legs are clear 3’s, but that can always change. e already complete is not a very pretty picture!, so unlikely to be correct.