This is a stat provided by the US department of labor; it is a weekly report that counts the initial – that is NEW – claims for the week it reports on. It says absolutely nothing about the total (accumulated) number of people claiming unemployment benefits (that comes a week later as the “continuing jobless claims”, presently at between 4/5 million ). The number is a function of the different eligibility criteria for each of the States.  500,000 roughly, or a good number that is 30,000 less, not counting last weeks revision, is completely meaningless. Here is the chart (updated); 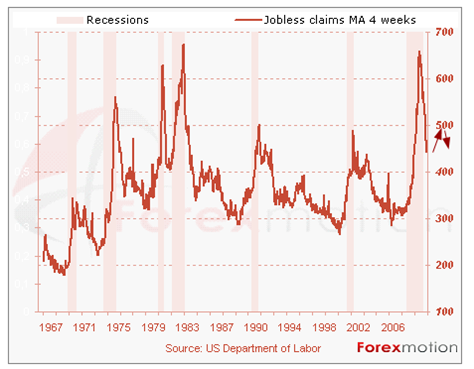 Notice that the only comparable period to today was in the early eighties when interest rates were about 15%, not 3%. Typically during the late stages of a recession demand for labor increases dramatically, this time around nothing of the sort has happened yet.