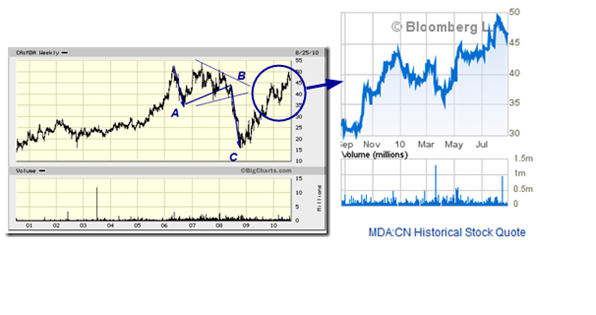 This is a fascinating company, not just for it’s businesses but also the performance over the past 5-years. At a glance it is obvious that the stock double-topped just recently at about $50; always a good time to step aside if just temporarily. On closer scrutiny the last up-leg – from $35 to $50, see detail chart -, is quite clearly a three-wave affaire (at least so far), coming immediately after a three-wave correction from $45 to $35. This suggest that the stock has in fact peaked. An immediate target would be $35 again. However, if the entire move from the low of $15 is a B wave (the A-B-C shown in the chart would in its totality constitute wave A, then wave C may be in progress which could (repeat; COULD) imply a return to the $15 lows.

Time will tell but in the meantime stepping aside is the only good option.