Last May when the stock first reached $14 it was suggested that one step aside as the easy money was made and the stock could drop to about $7. Here is an update only for those that are interested in EW! Enlarge to read! 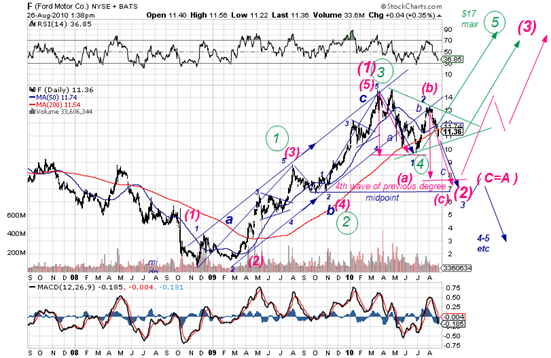 The blue was the original thought. It is an a-b-c as a minimum to get back to the top of the diagonal triangle that had preceded it. A drop back to the b wave is dead normal in that scenario hence the $7 target. Notice that a and c are of about the same size, about $7 each, and have similar structures with little triangles in the 4th wave position, a frequent occurrence. This is still a probable scenario but not the only one.

The ideal target of $16/17 was never reached so it is still possible that we have to go one higher. The most elegant count to allow for this possibility is the green one. We just completed wave 4 and are already on our way up, or wave 4 will develop into a triangle first and then we move up. As wave 3 is slightly shorter than wave 1, and as wave 3 cannot be the shortest the maximum for this scenario is < $17. Breaking the channel makes this a low confidence scenario.

Another possibility is (in pink) is that we had 5 waves into the high. This would itself be a first wave for the next major bull market. Not implausible considering the stock did drop to below $1 and has survived. As first waves are typically retraced quite deeply, often more than 62%, the $7 target is even a little optimistic but very realistic. Wave 2 should then take the form of two down legs with an intermission in the middle, i.e. an a-b-c. This seems to be the case and if c=a we would get close to the $7.

Putting all of this in the blender, the best thing to do is stay on the sidelines un till we get to $7 or one of the other scenarios becomes compelling.