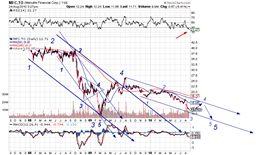 This one is either going out of business/ taken over or it has to be a screaming buy. ask your broker. Being the optimist I always am, I would again give it the benefit of the doubt, albeit with a tight stop. More negative talk has come out in the last week than I have ever heard, on almost any stock. Could be good, maybe??

For the record, I worked for Confederation Life just before it filed for bankrupt in 1994, I also worked for Manulife. Both impressed me by their complete and total lack of urgency: their approach to business was/is almost biblical. When they believe, they do so with gusto, but it only takes one single mistake to run a company into the ground,; Manulife’s was that they believed their own marketing  nonsense  with respect to their “income plus” product.

From an EW point of view, the stock could be in a 5th wave on its way to new lows. However, in that scenario a 4th wave up is still required and this could be good for $3/5 which ,relatively speaking is pretty good. Alternatively, the A-B-C down to $9 was the entire correction in which case the latest move down from $26 is a wave 2 (itself an a-b-c). The next move would then be 3 up.

My gut is that it is still a buy for at least 1/2 year, but only with a very responsible trade, that is with a tight stop-loss a few millimeters below whatever price you buy it at. The latest talk I heard was that it would cost the company an additional 7 billion to buy insurance for the event of another 50% drop in the markets for all its guaranteed products ( the first 10% is self insured). I do not know if numbers like these are real or imagined, but if real that still only represents about 1/3 of its equity.