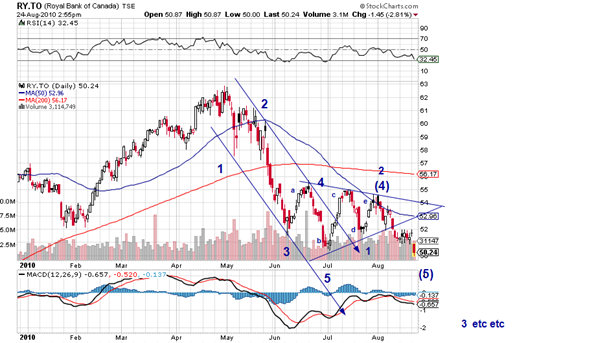 OFFICIALLY, whatever that means , you have a bear market when a stock drops by 20% or more, so the Royal, if it was not already there in July, it is now. Amazing , considering all the accolades that the Canadian banks, and our regulators,  received since the second great depression.

Where do we go from here? Not clear. We may have done a clean 5-waves down in which case we should get AT LEAST one more which could take the stock to $43 (or a lot further down). If we are now completing a 5th wave after a triangle, we are almost at the bottom but this flies in the face of the market overall. Rather than try to count, lets suppose we are roaring bullish on this example of probity and assume that a new bull market is already underway. In that case the move from $26 to $62 would constitute wave 1. Wave 1 is usually retraced quite deeply but lets assume a modest 50% would do the trick. That gets us to $44. Once we get there it will be clearer what is going on.