Quite some time ago I ventured to comment on the Nikkei and made some purely EW observations. Here is a repeat, more or less. Please feel free to disagree or look at it as pure rubbish (secretly I may even sympathize). Anyhow a lot of things Japanese are hard to imagine, for instance a 20 year bear market, the Imperial grounds worth more than the State of California, real estate values down more than 80%, a people that is at the edge of extinction at this pace , a currency that is at a 15-year high and so on and so forth.To the point, here is the chart; 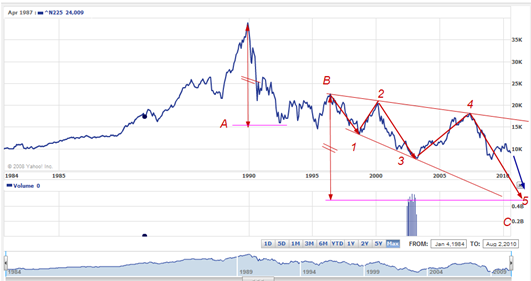 The interesting thing is that all the action since 1995 could (repeat COULD) be a single pattern known as a diagonal expanding (or contracting) triangle, that would constitute a wave C in a large A-B-C correction. This formation occurs fairly frequently either as a wave C (as in this case), or as a 5th wave, is very reliable and has a high predictive value as it represents an end-game and is, consequently, invariable fully retraced and usually quite violently. Also, perhaps because of the end position it takes, absolutely nobody believes the message!!! Just to elaborate that point, here is Ford during 2009 when it had this pattern (at the end of a 5th wave rather than as a C wave, but the point is the same). 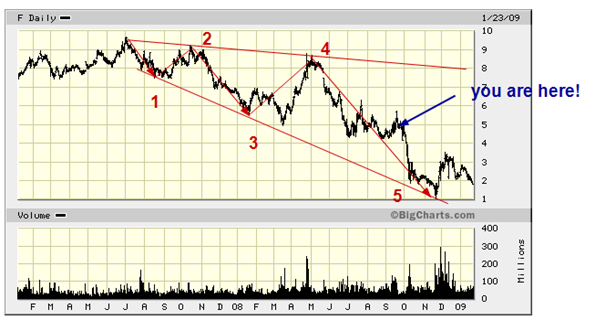 If have stylized the point of wave 3 a little and this may be incorrect, but apart from that the resemblance is pretty obvious. Ford went to under $1, when it reached the trend-line. This is NOT a requirement of the pattern as often it falls well short of reaching that line. Evenso, given where we are now we could get to the 3000 level or so (where the market was in 1970). Should it ever get to those levels the Nikkei, like Ford in December of 2009, should be a screaming buy.

Once again, you can click on a chart to enlarge it AND you can move it around to make the comparison a little easier. if you do that this is what you get. 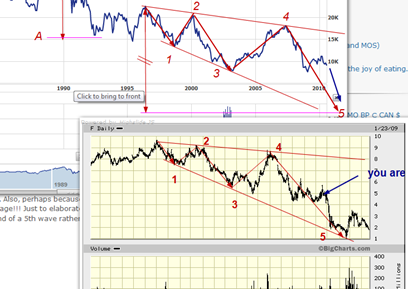