Potash has been around for a long time. For the farmer/settlers 200/300 years ago it was an extremely important byproduct of clearing the land for farming. The stuff was produced by burning wood and leaves and “distilling” the ash. It essentially allowed prospective farmers to get through the first few years during which there were no crops to sell. Most of this was exported to the motherland and used for cleaning wool etc. and the resulting income allowed the farmer to tide through this precarious period.  According to Wikepedia, the word potash is derived from the Dutch pot and as, meaning pot and ash. So much for that. The stuff does not exist in nature in its pure form , but you may remember it from your chemistry classes in school; it is that stuff that burns violently in water!

The stuff has remained rather inconspicuous, perhaps because places like Saskatchewan, Belarus and Eritrea are not normal vacation destinations, so much so that for the longest time the Province of Saskatchewan did everything in their power to create what can only be classified as a monopoly in order to keep their crown corporation going, to the chagrin of American farmers who constituted the lions share of the clients ( and still do ). One gentleman , from the fertile farmlands around Chicago, did travel to Saskatchewan after studying the way Governments work at Georgetown University, and joined the crown corp. in 1987 only to become CEO in 1998. The Crown corp. went public in 1989 at $18 a share (the stock had a 2 for one and a 3 for one split since so that would put the IPO price at about $3 in today’s terms). During the CEO’s stewardship to 2008 (about 10 years!) his personal fortune rose to about $700 mln. (stock peaked at $246). Much of that was lost in the downturn but the poor fellow is still worth supposedly $445, all this courtesy of the company’s “pay for performance program” that purports to align compensation to the peer group (F Stronach?). It is ironic that one of Canada’s most socialistic provinces would give birth to such blatant capitalism.

Then there is Canpotex, a marketing conglomerate owned by Potash Corp. , AGU and MOS, the only competition would be from a much smaller, similar marketing conglomerate in Russia. Given the size of Canpotex, about 40%+ they are the price-setters in the global market. The new owners BHP Billiton, if they succeed , have made it clear that they would not continue this arrangement, preferring to go it alone. Enough of this, here are the charts. 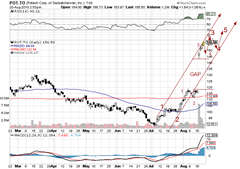 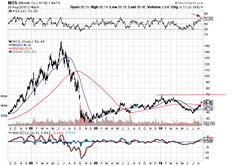 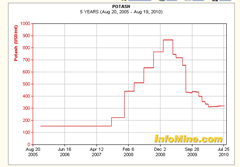 Each chart can be enlarged by clicking on it , and it can be moved around. A few days ago I suggested that the 50 to 61% retracement levels would suggest the stock should trade somewhere between $154 to $175. It has already entered this range at  $157,06. I suggested $160 might not be a bad exit point, this would equate to a level where the GAP is left in the middle. Looking at the other two, AGU and MOS it is interesting to see that neither have so far been able to make a new high. Furthermore, looking at the price of the stuff itself and assuming an oligopoly if not a monopoly in practice, and  an inelastic demand (may not be true over shorter periods) it follows that the value of these corporations (ignoring their other businesses) should be in an almost linear relationship to the price. Today that is around $350, or roughly 1/3 of the peak which would suggest a price of $82, $40 and $52 for resp. POT, AGU and MOS. Only MOS is fairly close, the other two are overvalued. POT is trading at a P/E above 30 and yields 0.25%. Notice that the Chinees, commonly presumed to be behind the demand, started eating  late 2007 early 2008; is it possible that they stop just as abruptly?

For my money , I would give it another day or so, perhaps even sell Monday morning if the price is anywhere near $160. Mondays are always good for extremes in the Canadian market as this is when everybody (that is the not so smart retail money) has had the weekend to catch up with events. It may just be an intermediate top with a 4 and 5 to follow, but the risk isn’t worth it. (Do not forget that other oligopoly , BCE , that was to be privatized at $41.75 two years ago, it was also considered a done deal but stumbled just before the finish line resulting in tremendous  losses to many ).