ABX is a reasonable proxy for gold being the largest producer and, only recently, being totally un-hedged . Here are a few charts;

I am very agnostic about all the arguments that are doing the rounds that gold can only go up. For 15 years or so this stock has made no progress whatsoever. Even after doing away with its hedge programme, a change that really sounded more silly than ever at the time, hardly a budge for this largest gold miner. Looks very much like a wedge, that is for the c part of an a-b-c correction. These sometimes go on longer than one could reasonable anticipate, but since we are pretty close to double-topping , my guess is that it is game over.  It is actually quite a non confirmation between the ‘stuff” and the stock. From the lows in 2001 , or so , this stock has gained about 150%+ in value, the stuff  itself is going up by 5 to 6 x.

Some silver stocks, poor man’s gold, equally suggest a little caution. Here is one out of many. 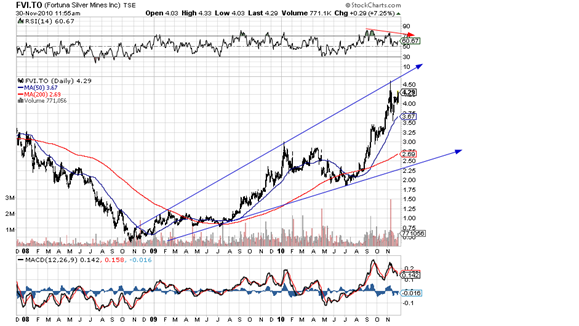