On BNN they had this hedge-fund guy, Einhorn, talk about some of his favorites, one of which was Sprint so I thought I would look at it from an EW perspective. It confirms the possibility that this stock may go up. This is in the same category as Starbucks which I do not understand either but it sure worked well! Here are the charts, starting with the short-term. 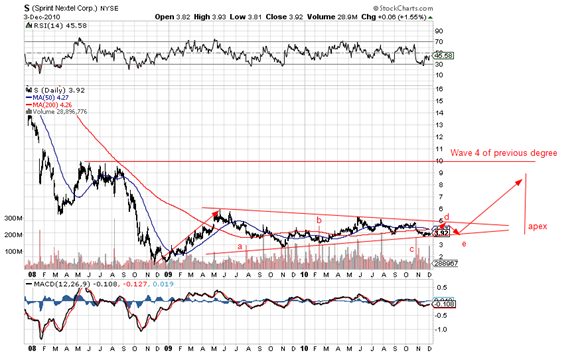 From a low of $1+ back in November 2008, out of synch with the market overall, it quickly regained  it’s composure by rising almost 6-fold after which it went comatose for nearly 2 years. As the saying goes, do not sell a dull market; this may well be a (wave b)triangle within an a-b-c correction from the lows. If so an explosive wave c is yet to come once the triangle’s waves d and e are completed. The stock should not trade below it’s most recent low and the “thrust”, if equal to wave a, should take the stock to $8/$9. Once there the $10 wave 4 retracement level is within spitting distance! Long-term this is all very plausible as can be seen from the long-term charts, arithmetic and log-scale;

The log-scale best illustrates the a-b-c corrective nature of the drop from $80 to $1. There is no need for this stock to drop further simple because there is no room left to do that. So the question is will this stock disappear entirely or will it rebound, or more importantly, will it rebound enough? As the stock has not completed an a-b-c yet from the lows a rebound is extremely likely, at least to the 4th wave of previous degree, in this case wave 4 of C at about $10. If it materializes that would constitute a gain of 150% or so.