We first recommended this stock at about $5.75, then suggested a sale at about $9 and later again at $15, each time pointing out that the stock could go much higher. After all it had done an A-B-C “correction” from $22 to below $4, a big move but still a correction implying , at least the possibility of a new high. Always mindful of how painful it is to lose money we are always a little eager to take profits, perhaps too eager. The stock is being taken over at $21, here is the chart. 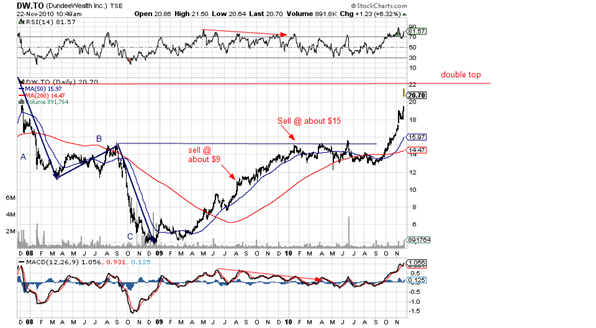 It did drop by about $3 after reaching $15 and it did spend about 8 months in the dog house but in just the last few months it shot up by almost $9 to essentially double top. The important message that can be taken from this is that when you have a perfectly symmetrical A-B-C it is possible that the correction is the entire correction and not just part of it, so a new high is just around the corner. This pattern occurs frequently, see for instance Ivanhoe IVN and, arguable , General Electric, GE.