It took the Hunt brothers’ fortune cornering the silver markets to push the price to about $55 an ounce. That was in 1981 when Kodak still made film and your dentist poured the stuff as an alloy in your tooth cavities. Those days are long gone and today, even after shooting up like a rocket the stuff is trading at pretty well half that price, give or take 30 years later. What an inflation hedge!  Here are charts of the SLV and HL (Hecla) one of the few pure silver plays. 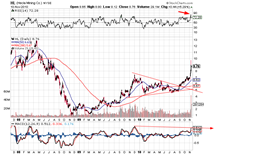 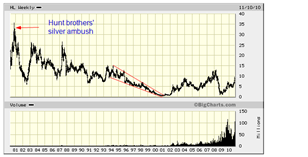 Just to belabor the point, silver has made new highs over the past 2 years but the HL stock is still far from double-topping. This non-confirmation does not bode well. The vertical uptrend is equally worrisome. For those that cling to the inflation–hedge myth it may be helpful to consider that HL at about $9 is trading at 1/4 of the 1981 value, a period of 30 years during which the value (purchasing power) of the dollar has lost at least 1/2, so combining the two, HL is now at 1/8 of its ‘81 value!

I would get out of the precious metals ETFs. In the old days the commodities were traded by way of the futures and the CRTC had limits to what size an individual player was allowed. Those limits were waived for a number of players such as GS, JPM etc. arguable adding to the financial debacle. The ETFs allow this same expansion of the number of players and the size of the bets to the point where the financial game is completely divorced from reality. This is fine as long as you realize that the game now is not about “ïnvesting” , instead it is more akin to playing Russian roulette with 2 bullets in the chamber!