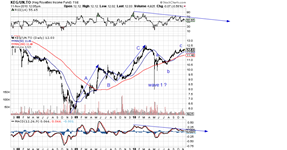 The Keg restaurant pays a return of slightly above 10%. At first blush his may seem very attractive given that the market overall pays less than 3% in dividends. However this is an income trust and the payouts for these structures (which must be phased out by 2011) are notoriously disconnected from their actual earnings(i.e. you may be getting your own money back)!The present payout ratio is 99.2% which is high by most standards and certainly for a capital intensive operation. The company has existed since 1971 but only went public in April of 2002. It is a franchise chain with a total market capitalization of about $130 million.

Since inception the stock has traded roughly on either side of $10. The present price of $12 is therefore not cheap. The RSI and the MACD both suggest a drop could be in the cards. More importantly the EW count that best fits the action after the lows is that of an A-B-C correction followed by a new bear cycle. Only if a new interim high can be achieved is this scenario negated. The Keg not that cheap , a decent meal for 4 will set you back $350 easily whereas the same meal at a Chalet Suisse would cost perhaps only $150. This upscale positioning is good when life is good and there are sufficient numbers of high-rollers ( compare to Harley Davidson , nobody buys one because they need one, only because they want one.) Should the market turn down again, this stock would be quite vulnerable.

For comparison purposes I have added Harley-Davidson (HOG) below;

Again click on the charts and move them around to better view the correlation.