These leveraged  Horizons Betapro  vehicles are fairly simple, you do not lose on futures roll-overs as no futures are used and consequently you do not suffer the debilitating effects of a commodity in contango (such as in HNU).  They are straight vanilla no nonsense tools that go 2x as fast as the underlying TSX. There are many of these, Google ‘direxion’ and at least 2 dozen come up that are leveraged up to 3x.

I like to look at both the up and the down as they should mirror each other and, if done correctly one can theoretically make a living just alternating between the two. Here they are; 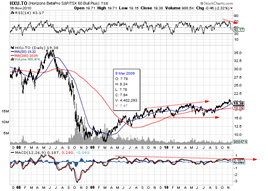 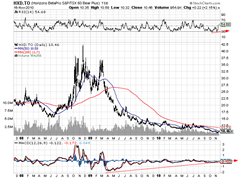 Before being let go at RBC (I am being polite) I had every single client of mine with a standing order to buy HXU at $8. They would have doubled their money. At the 62% retracement the HXD should have been bought. It is difficult to get it exactly right but the beauty is that even if the market runs against you, the sensitivity is quite low, whereas if it goes your way it really goes. It could well be that the market has another leg up , but if you are convinced that there will be a bigger one down, either now or later, this is an ideal investment if used in moderation. The SDS does the same for the US S&P (in US$) or as HSD (in Can $). Remember that you are not trying to catch the 30% movement, instead you are aiming for at least 100%