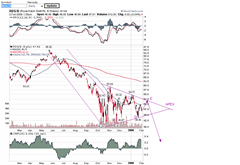 The Canadian market seems to be able to go only one way, regardless of whatever news there might be that day, so perhaps it is worth looking elsewhere for some clues as to what lies ahead. Energy is a very large component of the Canadian market and Royal Dutch Shell is a very big integrated oil company. The two charts above are old ones that worked out fairly well. Below is today’s picture, long  and short term.

This stock must have read Elliotte’s work as it meticulously follows all the rules perfectly. Every leg of the30+ year bull trend channels  very nicely. Wave 3 is the extended wave. Now looking at the short term chart it is obvious at a glance that the drop from $90 to below $40 is about 61%, and, it is also right at the level of the 4th of previous degree. The drop may, or may not be a 5-wave move but what matters now is the rebound from the low, which, so far at least, is a very clear a-b-c . This may yet change, but until it does so, this is very definitely corrective; the implication is that the bear market from the 2008 highs may not be over yet! After all it seems counter-intuitive to assume that a 30 year uptrend would be corrected in just a year or two.There is some leeway left to the upside before the stock would start it’s down- trek again, perhaps to $75 or so, but this is definitely something to keep an eye on.

A quick glance at XOM, the other big one, confirms that this is very plausible.

Again there is a consistent 30+ year uptrend. However in this case the drop ,that initially took a little more than a year, did NOT retrace the usual 61%, nor did it reach the territory of the 4th wave of previous degree ( about $50 t0 $30 ). furthermore the move back up from the first low, so far at least, looks itself like a little a-b-c to form a B in the larger down-trend. This scenario would allow for a further rise to about $78, then down for the second leg to about $40. If nothing else it is food for thought as unless someone figures out how to make water burn this scenario could really only work if there is some sort of economic down-turn that would , most likely hit all commodities. Not good for the TSE, but for the moment just a possibility worth keeping an eye on.