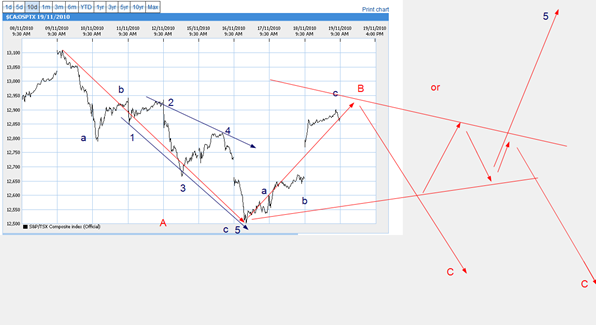 Still pretty certain that first leg down was NOT 5 –waves and given the sharp rebound it will never be 5-waves, which simple means that this “correction”will be more complex. A flat a-b-c is possible with the b leg almost complete or becoming a triangle. Alternatively the whole thing could become a triangle and the legs so far are a and b with c,d and e still to follow. That would imply that the lowest point in this correction has already been reached. At about 600 points after a 2000 point upswing that would be very shallow indeed! With all the hype surrounding GM anything can happen. By the way, for every one applauding the resurrection of GM, there is probable someone else lamenting the fact that the free-market was not allowed to follow the “creative destruction” script a la Schumpeter. Excess capacity has been allowed to stay which will make the future of the auto industry in North America all the more difficult. The writing is clearly on the wall, after an absence of nearly 30 years FIAT is looking to make a comeback, never mind the huge wage differences from companies in India and China that we have yet to hear from.