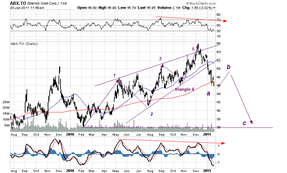 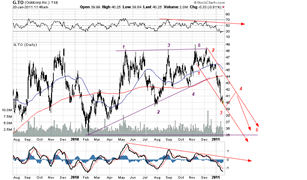 Both these large cap. gold stocks developed rising wedges/flags, pennants, contracting triangles in EW speak or whatever you want to call it. More often than not these structures are erased in their entirety.Roughly that would take ABX down to $36 and G to $35. That is not all of it as, depending on how we get there, 3-waves as shown in the ABX chart, or 5-waves as in the G chart, these stocks COULD drop a lot further. Notice that on both these stocks the RSI and MACD were ringing the proverbial bell on the floor. Goldcorp rang the bell even louder having failed 5 times to rise measurable above it’s previous peak.

Small gold stocks have not done much better recently, see for instance ZJG which is a sort of small cap.index. Recently, November last year, right at the top, we pointed to FVI for the simple reason that it is called Fortuna and all though we do not speak Spanish ,we suspect that it translates , more or less as fortune. Of course it does not say which one – the one you are going to make or the one you are going to lose. Here is the (short-term) chart; 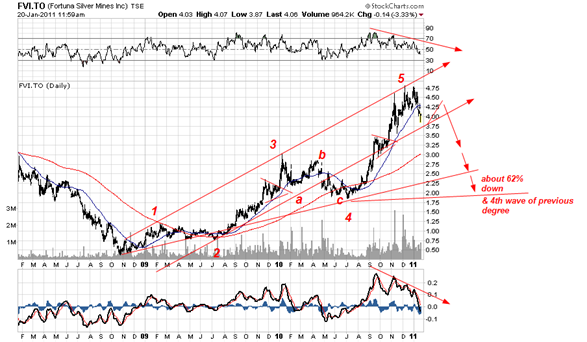 We are trying to keep an open mind with regard to the count. The one used above is by no means the only one possible so we concede that it,and the conclusions drawn from it, may be dead wrong. On the other hand there are a few good reasons to assume it might be correct. For one thing , the upper-trend line is respected perfectly by each and every high in the stock, of which there are five or six. Also the 5th wave, which is the extended one, is pretty close to being equal to waves 1 to 3 combined, again a common occurrence, especially where commodities and/or commodity based stocks  are concerned. Furthermore the RSI and MACD started rolling over about half a year ago. If correct $2,50/ $2,00 are consistent with this count, which if you own it from the highs would mean the loss of , at least, half your fortune.