In EW terms the B-wave is normally the mid-wave in an A-B-C, correction, (by definition 3-waves). They tend to have an inordinate amount of symmetry and seem to ignore all fundamental information being almost oblivious to the rest of the world. There are 2 basic problems with the B-wave. First of all what may be 3 waves now can always develop further into 5 –waves and thereby stops being a B-wave. Next they can, and often do, rise above the origin of the preceding A wave which, intuitively, seems to make no sense. Yet it happens like clockwork and sometimes with a margin of about 30%. Despite this , it still is a B-wave. Here are 4 examples (there are literally dozens of them right now). 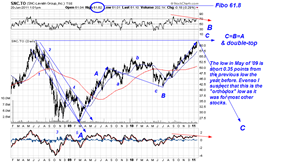 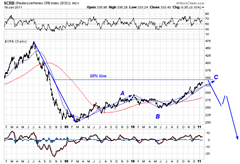 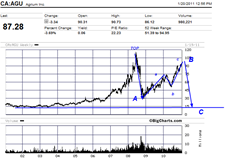 Typically the B-wave will retrace 50% to 62% in most cases, sometimes more and , if it gets that far, it frequently double tops, as in SNC above. The symmetry is nearly always present for reasons I do not understand, markets just love symmetry. In most cases that means that waves c and a in the B wave are equal (as vectors). This is pretty much the case with all four examples. In some cases the symmetry goes further and all 3 sub-divisions in the B-wave are vector equal, as, again, is the case with SNC. Anytime you observe this symmetry it pays to be very careful as once the B wave is complete, it is right back down often to below the starting point. If by some oddity the top should occur at a rather precise Fibonacci number (61.8) as for instance with the Canadian dollar in Oct. of 2001 or 2002 and now with SNC, I would get out altogether.