Both BCE in Canada and GE in the States were, once upon a time considered to be “blue chips”, which, freely translated meant that these stocks were more or less impervious to down cycles , too big to fail, and dividend paying, in short excellent investments for widows and orphans and all those other investors that did not want to play roulette. Here are the charts.

BCE dropped from $50 to $18 or , give or take, 62% and GE did an even better job by dropping from $60 to $6 or 90%. BCE was always considered a grossly mismanaged company and GE, in contrast, the learning school for the latest sophisticated techniques in advanced management. One blew up by falling asleep and the other by not sticking to its knitting, by aggressively becoming a bank. The moral to be drawn from this is that there are no blue chips, period.

Both these stocks may have completed an entire correction lasting about 10 years, which would imply that they are now in new bull markets. This view is more compelling with GE than BCE! All the more so if one looks at what they make. One is in phone services where the costs are gravitating to zero and the other makes jet-engines, dish-washers and a million other things. I would put my money on GE. 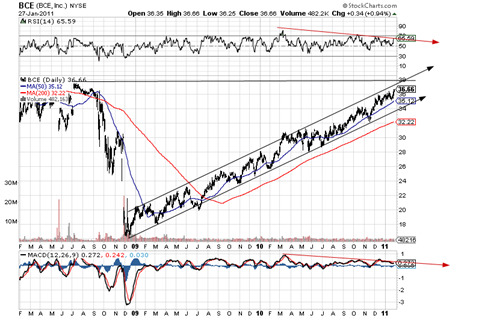 Short – term BCE may try to get back to the $40 level (top of B of C ) where it briefly was just prior to the debacle with Teachers et al trying to take it private. I have NEVER seen a chart that is so trend persistent – for  over two years this thing has been on track without any pull-back. The RSI and MACD  are already turning and this cannot go on for ever. It is about $3/4 from its target. Get out or use a tight stop, $34 where the lower line runs or even higher. Even if this is a NEW bull market, typically first waves up are retraced by 60% or more.