Potash keeps fascinating. Everyday, ad nauseum , we here from our friends in Saskatchewan that this stock is worth much, much more. Just to help that notion the dividend is doubled, a stock-split 3 to 1 is announced and just about every other trick in the book is used. Completely without self interest of course ( the top dog is now close to 1 Billion for himself, and the premier is now a person rather than a nobody). You can listen all day to BNN or CNBC and literally everybody, without exception, knows that this thing is going up.

Malthus lived about two centuries ago. His claim to fame was his dire prediction that we would all starve because the World could not support a population that was then about 1/10 of what it is today. His arguments sounded quite plausible but so far it has not (yet?) happened. Now we are getting a slightly different version of the same argument, this time it is the Chinese  joining the west and wanting stakes on their BBQs. But; 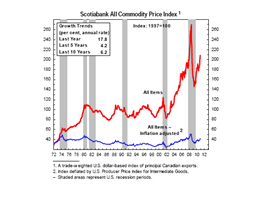 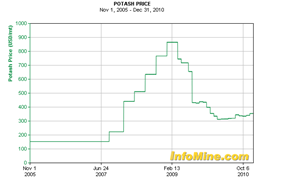 On the left is the Scotia all commodities price index, notice that it is nowhere near its highs and seems to be completing a b-wave correction which would mean that it could resume its drop to levels where it was for 10/20years before the peak of 2008. Notice also, on the right, that potash as a commodity reached a price close to $900 per unit, it is presently at a bit over $300 and has been there for quite some time.   Potash Corp is operated as a cartel, an oligopoly with POT as the lead dog with, I believe 40+% of World output. The name of the game is to restrict output in order to maximize the monopoly rents (like OPEC). As a consequence income is in direct relation to the market price. Two years ago $900 per ton equaled $240 per share, today $300 should equal about $80 or so. You are paying more than twice as much today. Not very sensible.