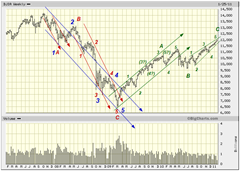 EW has many drawbacks. You can take it too seriously and than you can be perfectly right but 20 years too early which does not put food on the table. Also these markets seem to be moving a lot more , even relatively, than they used to. Looking at the DOW, it has travelled about 19,000 points in the last ten years. It took the Dow more than a hundred years to get to 1000 and it basically stayed there for 26 years! Counting the waves is an art and the results are often controversial and restated years later. For instance, at one point in time it was thought that the 1987 crash might have been the elusive end of the 5th wave. Clearly it was not. Internally there was dissent in Gainsville , Prechter’s home town when one of the top gurus did not believe that the “tech crash” was the big one. Problem is this stuff can be addictive so you keep trying.

The chart on the left shows the drop in the Dow and the rise back up. The initial drop appears to be 5 waves but in my opinion it can be counted just as easily as a 3 wave a-b-c. Typically 5 waves announce a zig-zag (after a relatively small rebound say 50%, you go down again) whereas the 3-wave structure calls for a flat (where you return close to the top and only then go down again). As a result my guess is that the purple scenario counts best at this time given the size  and the duration of this retracement. The TSE and the Dax, below, best fit that specific count.

The TSE strongly suggest that the latest top, that is the one in 2008 was THE top, and not the one in 2000 (which is the case for instance for GE). The Dax is less explicit about this issue (it is a semi-log chart!) as the two tops are at about the same level. In fact that chart might even suggest a triangle, but that does not fit with the others as it would imply a different degree. This is the case with the black and red scenarios which assume that we are already in a new bull market- there are numerous reasons why this is highly unlikely.

Make a long story short we will stick with the purple count. Click to enlarge.