Ford has been one of our best calls and also one of the most controversial. From $1 to almost $19 is quite a performance, more than we expected as we had $17 as the very maximum for this first round. This market seems to be “irrationally bullish” once again , to use the phrase that Greenspan coined  a decade and more ago, the one time he was sincere. It seems to always and everywhere push stock prices beyond what one would reasonable expect Here is the chart. 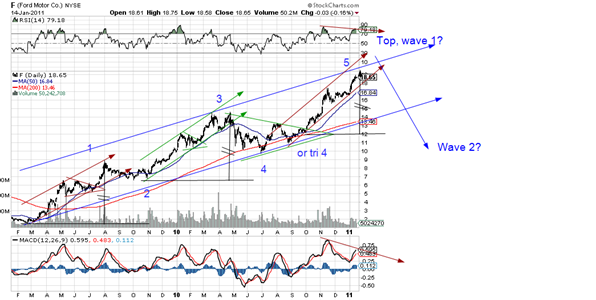 Here is a count that may or may not be correct, but at least it seems to be perfectly valid. The $17 is, by the way, derived from the big-chart (not shown) where it denotes the level of the previous degree wave 4, the normal initial target. Notice that all 3 upward waves in this chart, 1,3 and 5 are essentially the same size in terms of vertical distance and also pretty close in terms of time spent. (Vector equal, in other words). We know from the pragmatic findings of EW that wave 3 cannot ever be the smallest, which, if your pencil is sharp enough, means that wave 5 cannot go any further.

According to the founder’s grandson who now chairs the company, there are many unknowns in the future with respect to building cars, the green ambitions that Ford has, government aid to introduce green policies and the acceptance by the public of the Volt.  We know that the rational consumer, the guy with the slide-rule and a brain , that most economic theory is predicated on does not exist in reality. But just for fun lets see how far people have to depart from this guy to fall in love with the Volt. You can buy this thing for $41000. You can also buy a Corolla or even a Ford Focus for about $18000 (just to mention two), never mind that car that soon will be imported from India for $6000 or so or the Hyundai that is already available at $10000. After you add HST to the difference in price of about $22000 , the Corolla is $25000 cheaper upfront. It does about 15 km/liter so at today’s price of gas, about $1/liter, you could travel 375000 km before you break even. If you add in the effects of time-value of money, maintenance cost for a very complicated car against a very basic one, insurance etc.etc. the difference becomes much larger. Ergo, I would expect acceptance to be very low, something like that of the Prius which is far from an economic success.

We would step aside if not already done so.