2 years ago we opined that the stock had not yet completed 5 waves down and therefore could go lower. (see old blog). Even though that assessment proved to be correct,it did not help very much as we forgot to look at it again for too long a period of time. Today at almost $65, or $12.5 above the levels attained at the triple top in 2007/2008 we would sell the stock.

Fundamentally, if you agree that buying low and selling high is the way to go about investing , the question how high is high must have presented itself. Could this be high? Like a phoenix this thing rose out of the ashes and here it is well above the old highs, mostly due to the China’s insatiable appetite for iron ore, copper and what not. So the stock could be vulnerable should China’s Wirtschaftswunder come to an end, that is level off.

Apart from that the charts suggest 2 alternative possibilities, here they are;

Apart from clearly showing that this stock, should it regress back to the mean, is overvalued by at least $20. More importantly, in my view, there are now two possibilities in EW terms. The first , on the left, is that the orthodox top in this formation occurred sometime in 2007/8. As there are actually 3 tops at about the same level (not shown well in these charts, anyone could have been the top. It matters little except that the drop into the lows is consequently clearly not a 5-wave move; perhaps an a-b-c. On the right we assume that the whole upward cycle was not yet complete and needed a 5th wave. That both possibilities can be reconciled with the structure of the up move is pretty clear from the detailed chart below; 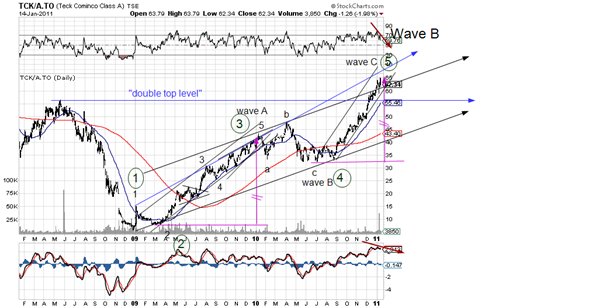 This leg can clearly be counted as either a 5th wave (with 5 subdivisions) or a large B wave (with 3 subdivisions) that rises above the orthodox top. At this moment one cannot say with absolute certainty that this stock cannot go up another $10 or so , but what can be said with a good deal of certainty is that the next big move will be down to $3, or $32 or anywhere in between, depending on which chart you believe. Time to say thank you and move on.