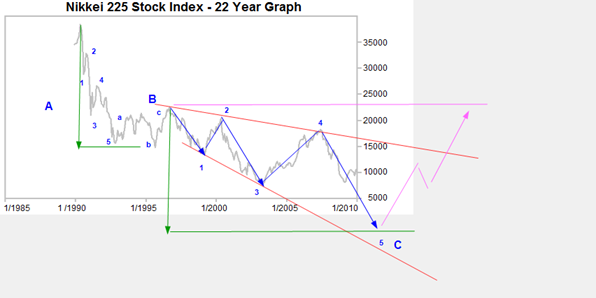 In Jan. last year we put this out as a possibility for Japan’s Nikkei index. As each down-leg in this wedge should consist of 3 waves one would expect an “intermission” so to speak approximately at the mid-point. From the short-term chart , this time from Yahoo, finance, below, it would appear that that is exactly what we have been getting.

Ford, of course shot up and now is over $18 but that is not the point. The pattern, that is the expanding diagonal triangle, is. With Ford I recognized the pattern well in advance of it’s completion but did not anticipate that it would go all the way to the lower trend-line and then some; $4 seemed low enough. Here we are at the exact same juncture with respect to the Nikkei. Looking also at other Japanese indexes as, for instance, EWJ, the movements for the past year or so look corrective supporting the notion that we are only in the b of wave 5 of this structure, so c is yet to come. Keep in mind, however , that you do not have to go to the trend-line, often as not the drop stops well before that!