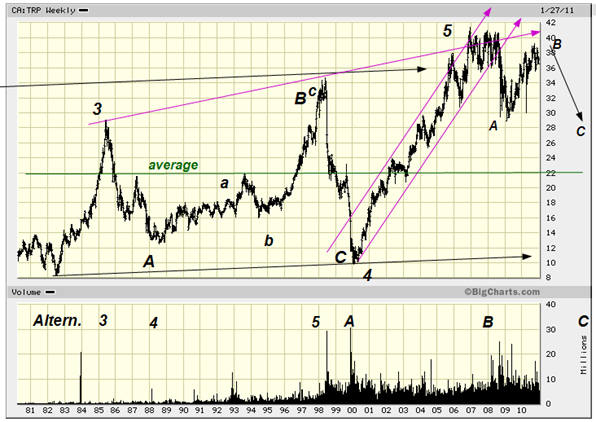 This is Trans Canada Pipeline, a long time “blue chip” and favorite of risk adverse investors, until , of course, it betrayed them by doing what it had promised a multitude of times not to do – cut the dividend. In a fairly short period of time the stock was punished and traded down to about $9 (in 2000). There after people realized that this was not a tech stock but a utility, and the stock regained its composure and then some. From an EW point of view, both big drops on this chart appear to be zig-zags (down fast and only the briefest intermission). This suggest that they are of a different degree which favors the alternative count. Either way we were at a “generational” high in 2007 and have not move far away from that. Regression t0 the mean would suggest a further drop to at least $22 , which  conveniently happens to coincide with a 62% “normal” retracement.

Short term it is hard to come up with a plausible count. But there appears to be either a triangle or a wedge right at the top which does suggest a top is near. It already reached $39, only a little shy of the all time high of $41. Both RSI and MACD are starting to point down. A stop at about $35 would be appropriate, should it manage to go up first I would sell at $40/41. A quick look at another infrastructure energy related stock, IPL.un suggest the stock is a little over valued at this time and may fall back to its 4th wave (chart on the right.