Once upon a time, about one hundred years ago, the sale of oil was subsidized in the US in order to stimulate demand. They could not give the stuff away. Not that long ago  (1998), it traded at around $10 or so which might actually have been cheaper, on an inflation adjusted basis, than it was at the end of the nineteenth century. Here is a chart.

In 1998, the same year Ford reintroduced the V8 engine that had been mothballed for many years before that, oil hits a low after going up and down for many years in what some EW gurus believe was a 4th wave triangle. If so the rise from $10 to $147 in 2008 is probable a 5th wave with the , for commodities usual,  excessive blow-off. Then it comes back down to earth at a phenomenal pace in what must be the first leg of a correction (A), then comes the B wave. Here are charts with a little more detail; 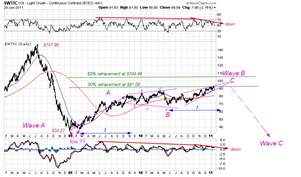 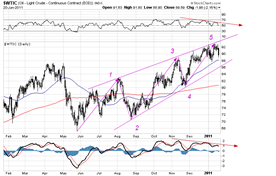 On the left we have a picture similar to that of the NYSE ; again we have an expanding triangle or megaphone in the mid position with an A and C leg on either side. Symmetry is not perfect but close. The retracement has reached 50% which is good enough even if a little less robust than 62%. Both RSI and the MACD have rolled over a long time ago. But the dead give away is the wedge in the C position. This structure should be a 3-3-3-3-3 leg affair, it normally has overlap between 4 and 2 and it only exists in a 5th , or C position. Similar structures occurred recently in ABX and G. These things can be a little treacherous as any two 3ies is itself a 3 so one can be mistaken in believing the structure is complete when it is not. In this case the rise is so anemic that the risk that that entails is relatively minimal. A break of the lower trend-line at $86 would confirm the end of this structure and the beginning of the next leg down to, at least, $68.

By the way, the point here is not if I myself believe this or not. I am simple applying EW. What would cause such a drop is anyone’s guess, perhaps someone will figure out how to burn water, or some mega field is found right on our doorstep. Maybe we will start burning thorium in our nuclear reactors or the Ford Volt really catches on. Or maybe the global economy will be sufficiently sluggish ; it does not take that much because no one can afford to hold back on production and this stuff is, after all, priced at the margin. One thing is certain, should this happen, and that is that one Canadian economist will be writing another book to explain why the World is not yet getting smaller.