The NYSE is arguable the broadest of all the benchmarks for the US equity markets and consequently offers the best “picture” of what lies ahead. Here are the charts, long-term, mid-term and short-term.

The bigchart on the left covers a generation, about 40 years and I assume the low was in or around 1974. The next 34 years are the bull market primarily driven by the baby-boomers who are now about to retire (and presumable moving from an accumulation mode to a draw-down mode). Into the peak, in 2008, a five wave sequence can be discerned that looks pretty well straight vanilla EW. The drop from that peak erases about 60% in little more than a year what had taken 34 years to make. This is done , again ,  in a fairly straight-forward and easily recognizable five wave dive.

EW gives structure to what is pragmatically observed in real life, as such it is not a “theory” and it postulates nothing, all it does is observe what is. One of these observations is that 5-waves in one direction never stands alone, that is there is either an A-B preceding it, or a B-C following it. Here the latter clearly applies, which is why one would expect another dive despite  the fact that a drop of 60+% is more than sufficient for a bear market. Also it is intuitively highly unlikely that 34+ years would be corrected in a little over a year! So, we are looking for a B and C wave. 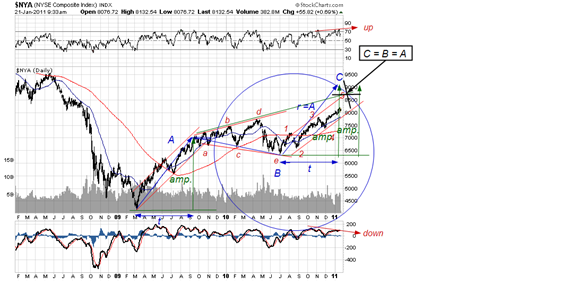 This brings us back to the B-wave, in this particular case one that follows the A – triangle B – C structure, albeit with an expanding triangle instead of the more common contracting variety, which does not make any difference. Note that so far the NYSE has retraced about 60% of its drop to where it is today. Furthermore the time spent in wave C is equal to the time spent in A (see blue t ) and C is roughly 60% of A in terms of amplitude, i.e. vertical distance travelled (see green arrows). The MACD is already turning over but the RSI is still going up. This could mean that we have, give or take, completed the B-wave.

The one and only thing that argues against this is the markets idiosyncratic propensity to do things in perfect harmony, that is symmetrically. Even though the time spent in waves c and A is equal that is not the case for the amplitude. To become “vector” equal this can go on for perhaps another 3 months or so and the index could climb to , give or take, 8600. This is a level where the upper trend-line of the expanding triangle intersects with the blue circle and A,B and C are vector equal..

As there are only another 600 points to the upside, maybe, and at least 4000+ to the downside , the risk reward suggests that it is time to pull the plug. In Germany business confidence has reached its highest level EVER  (go figure) ,so, from a contrarian point of view, maybe this NYSE will roll-over sooner rather than later.