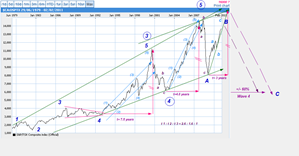 Of course I am annoyed by this market going up 160 points a day, simple because I  (EW) do not like being wrong and worse, not sure that I am. We went down 50 % and up the 50/60% as anticipated, that is like 3/4 right . But we seem to keep going without  rhyme or reason. The question now is do you capitulate and join the mob, or stick to your guns? I would opt for the latter!

First of all there are more B-waves all over the place that suggest this thing is as ripe as a rotting plum on a hot summer day. Secondly, now that we are close to 14,000 there is not that much upside before we hit the proverbial concrete wall. first at the double top level and then, at the parallel trend-line.  Thirdly, even if we should reach these lofty heights, the NEXT big move is down big time. This is where the Pavlovian dogs excel at being stupid, and I certainly do not wish to join that party.

What is going to do the trick? At the previous top it was Nortel, which stock then constituted more than 30% of our market. I had a target of below $10  (documented!) when it was at $124. Nokia did the same for Finland. Obviously I did not “understand”. Here the catalyst, I suspect is going to be China. The misallocation of capital is going to ruin them, not in the long run but for the next 5 years or so , starting soon.

Here on a semi-log scale is the Dow Jones for comparison purposes. One can argue where the actual top should be (2000 or 2008) but in the vast scheme of things it really does not matter one iota. 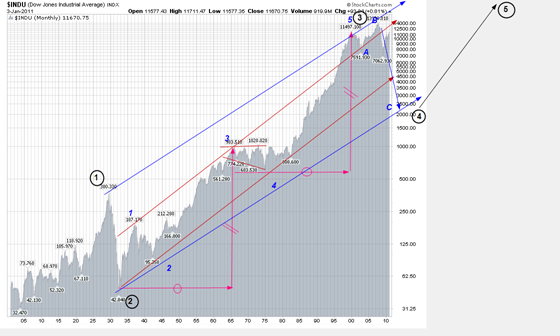 Amazingly, it has done everything EW would have suggested.  Except that the scale of it all seems to be so large. If one adjusted the above chart for the purchasing power of the currency of the US, the market essentially flat-lined for a century. Today we had the first press conference ever given by a Fed chairman, that is in the 100 year plus 3 months history of this institutions conception. For the first time we need not wonder anymore if there is a plunge protection team; the chairman Bernanke nervously confessed today. What we do not know yet is if the world will forgive him. Time will tell.