The Toronto Star carried an article about housing from Capital Economics, precisely along the same lines as I have talked about before. I am sure they will not mind my using one or two of their charts. 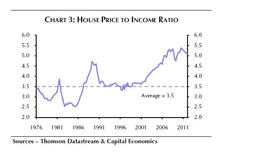 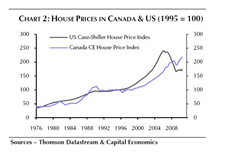 On the left a comparison is made of house prices in relationship to family income. (it is not clear always what that is, his & hers; before or after tax etc.) .Typically since thee stone ages that ratio runs at about 3x, according to the chart 3.5X on average. We are at 5.5 x, almost 60% higher then the norm. To get back to the norm they argue that our market needs to drop 25%, but to get back to the average (regression to the mean) a drop of 40% is needed and that does not take into account the usual overshoot.

Country properties, hobby farms and other such properties can be hurt a lot more. From 1989 to say 1996 some properties North of Highway 7 (the edge of the Earth for Torontonians then), dropped 50–60% easily and some commercial properties 70-80%. 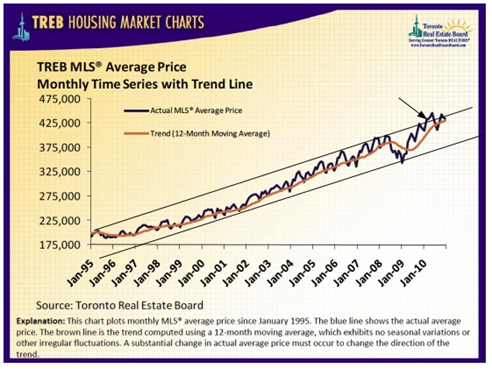 According to the Toronto real Estate Board chart (the annotations are mine) prices rose pretty evenly (staying in narrow channel) but also quite rapidly over the past 10 years. Roughly from $200,000 to $400,000 which equates to an annual compounded return of 15%. Notice the throw-over in late 2009. That may just be it for a while. None of this, of course,we are told by the central Banks, has anything to do with variable mortgage rates close to 2%!