You can find the article on the Economist’s website economist.com under Buttonwood. Betting on Ben (Bernanke). According to the article the overt interference directly in the stock markets by the Fed (and other Central Bankers), raises the question how much equity values are above levels where they would otherwise be. One way of calculating this is by way of the “cyclically adjusted price earnings ratio by R. Shiller (a 10-year smoothed p/e ratio). The chart for this is available on the internet;

I have added a red and green line, the red one is where we are today and the green one is my best guess for the average over this 130 year period. The Economist calculates that the present p/e level is approximately 45% above the long term average and equal to levels at previous (interim) peaks in 1901 and 1966 (top of wave 3! and beginning of 26years of sideways trading).

Apart from the support from the central banks the article goes on to explain that the deteriorating demographics (at least in the US) will also negatively impact equities . This is a well known argument that has been abundantly talked and written about by Foot and others but the Economist uses a slightly different approach; 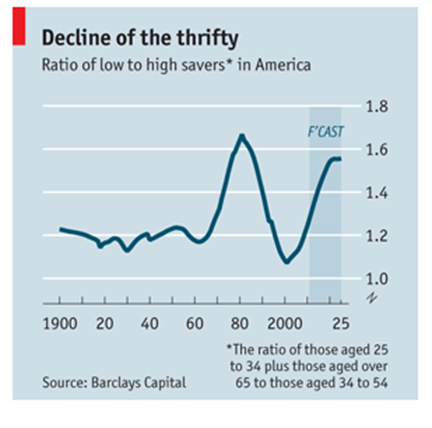 The idea behind this chart is that you can divide the world (USA) in low savers and high savers. Low savers are people between the ages of 25 and 34 and or those above the age of 65. This group is either so burdened to stay alive or actively dis-saving in order to finance their retirement. The other group is sandwiched between these ages and they do save and invest. Unlike economic variables, demographic ones are invariable quite accurate and the story here is that things are deteriorating rapidly, as the ratio is about to rise from 1.2 to 1.5 or so. Last time this happened it coincided very nicely with the 1966-1982 period of sideways markets.

The conclusion then is that if you buy equities at these levels and now, you are betting on Ben, which is much the same as “don’t fight the Fed”. But for how long? The last few years bad news seems to always be interpreted as being good for the market and visa versa. The link , of course is Fed policy where bad news allows the Fed to prolong their low interest rate policy and good news might force them to abandon it sooner. Ironically , when this market gets killed, it will probable be because of all the good news.